During a visit to Australia last month, I had the opportunity to visit the Commonwealth Scientific And Industrial Research Organization (CSIRO), the country’s main governmental organization for scientific research and development. More specifically, I visited CSIRO’s Materials Science & Engineering Division in Lindfield, New South Wales, about eight miles north of Sydney.

CSIRO is well known in many parts of the international scientific community for the quality of its work. It has its origins in the Advisory Council of Science and Industry which was founded in 1916. Today CSIRO has over 6,500 staff (approximately 5,200 full-time equivalents or FTEs) who work at 56 sites in Australia and overseas. While folks outside of Australia may not be too familiar with CSIRO, you undoubtedly are a beneficiary of some of its work; inventions at CSIRO include the underlying technology behind Wi-Fi systems, phase contrast imaging for X-ray imaging and atomic absorption spectroscopy. The organization had an annual budget in 2012-2013 of approximately AUD 1.6 billion.

Materials Science & Engineering at Lindfield (the Division also has sites in Victoria) shares a building with the National Measurement Institute (NMI), Australia’s top body responsible for maintaining Australia’s measurement standards. I had to chuckle when I arrived in the lobby of the building – on the wall opposite the front entrance are a couple of clocks which show VERY precisely the time at that moment – no excuses for being late in this building! I later found out that it was here at this location, in a collaboration between the NMI and CSIRO’s Australian Centre for Precision Optics (ACPO), that a pair of extremely round objects were created and measured, as part of the international Avogadro project. This is an initiative centered on developing a new way of defining the kilogram, the SI unit of mass. Unlike all of the other fundamental SI units of measurement, the kilogram is the only one that is defined as a comparison to a physical object. The NMI / ACPO project set out to produce two perfect spheres of pure, single-isotope silicon, containing enough atoms to make a kilogram. The idea is for other researchers to then measure the number of atoms in these spheres, in order to re-define the kilogram. The best sphere that the scientists achieved as part of the project had an out-of-roundness of just 35 nanometers – less than 150 times the diameter of a single silicon atom!

My visit to the Lindfield facility was hosted by Dr. Stephen Collocott, a long-time researcher in the field of magnetic materials and applications. I first met Dr. Collocott at a magnetic-materials conference many, many moons ago. We’ve been corresponding and bumping into each at conferences and workshops ever since. It was great to finally get to visit him on his home turf and to learn more about the work that he and his colleagues do at CSIRO.

Dr. Collocott wears two hats these days; he is the group leader for magnetic materials research at CSIRO’s Materials Science & Engineering division; he is also the stream leader for electric drive systems, within CSIRO’S Future Manufacturing Flagship initiative. These Flagships bring together multi-disciplinary teams to focus on key research themes. Dr. Collocott’s group has for years been involved in the application of magnetic materials to real engineering systems, and so is a natural fit for the Future Manufacturing Flagship. The group frequently conducts contract research for OEMs and other companies in the manufacturing, automotive, appliance and general transportation sectors. Past and present clients include GM Holden (both CSIRO and GM Holden are members of the Co-operative Research Centre for Advanced Automotive Technology), Electrolux, Marrand Enginering, and Transfield. The group, presently consisting of eight researchers, has particular expertise in electric machine design using 2D and 3D FEA, power and control electronics and machine simulation.

The magnetic materials group at CSIRO was involved in some of the early work to characterize and optimize neodymium (Nd)-based permanent magnet alloys (Nd-Fe-B). In the early 1990s, a spin-out company called Australia Magnetic Technology (AMT) actually set-up to manufacture approximately 50 tonnes / year of these materials in a pilot plant for the Australian market. Plans to scale up production were put on hold indefinitely due to falling prices at that time, as a result of the growth of Chinese magnet companies. AMT was eventually acquired in 2003 by AMF Magnetics, another Australian magnetics company.

The CSIRO magnetics group continued with its materials research work, being involved in the subsequent discovery of so-called 3-29 rare-earth intermetallic phases for possible permanent magnet applications. They were also involved in melt spinning, mechanical alloying and hydrogen-based processing of rare-earth-based materials, as well as powder metallurgy. This work eventually evolved into looking at more fundamental questions concerning magnetic materials, relating to, for example, the role of dysprosium in increasing the resistance of Nd-Fe-B magnets to being demagnetized (coercivity). The purpose of such research was to increase understanding of the underlying mechanism in such materials, rather than creating incremental improvements in specific magnetic alloys.

The group then turned its attentions to the use of magnetic materials for specific end-use applications, building on the industrial collaborations that it had fostered over the years. These days the focus is on high torque density and high power density electric drives, based on brushless permanent-magnet machines as well as switched-reluctant machines that use no magnets at all. The idea is to provide the best machine required for the specific application being developed and refined. Examples of such applications include drives for electric vehicles and for more energy-efficient (and lower cost) consumer appliances such as washing machines. Some of the group’s machines have been used in ultra-long distance races for solar-powered vehicles, where the ultimate in efficiency and reduced weight is required. Being able to meet or exceed the specifications for such challenging applications helps to spur the wider development and utilization of such devices for commercial applications, just as innovations that we see in, for example, Formula One racing cars eventually make their way into the mainstream some years later. 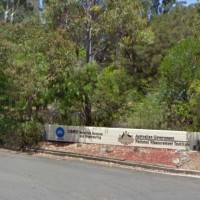 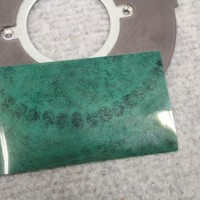 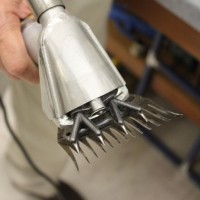 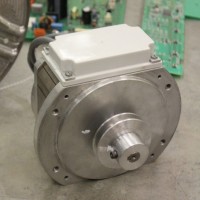 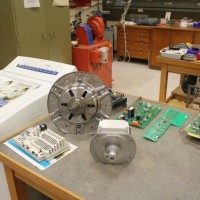 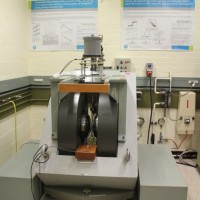 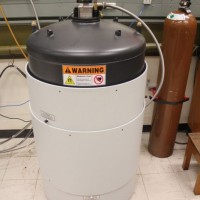 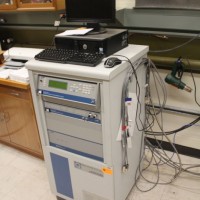 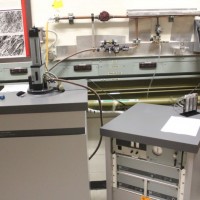 During my visit I got a chance to tour Dr. Collocott’s group laboratories; as you might imagine, a number of the projects are sensitive (commercially or otherwise); I was allowed to take some photos though, which can be seen by clicking the thumbnail images above. I saw some really interesting electric devices and equipment under development, but I think my favorite device of the ones that I was shown was a more energy-efficient electric sheep shearing device. This tool uses an Nd-Fe-B magnet, and dissipates heat by using the blood flow in the operator’s hand, without him or her noticing the device getting warm. A very clever and elegant way to improve a long-established tool used in one of Australia’s quintessential industries.

Dr. Collocott commented that 60% of the CSIRO budget comes from government funding; the rest is drawn from contract research, royalties and licensing fees from previous technology, as well as cooperative entities. The organization has a number of ongoing research programs in collaboration with groups outside of Australia. One example in which Dr. Collocott is involved is with the University of Shanghai. He commented that quite often, Australian-based researchers are seen as “honest brokers” when it comes to their perspective on matters pertaining to strategic materials. This reinforces similar comments that I’ve heard from others too, from entities that would rather work with Australian than US or even Canadian groups, for this reason.

That said, CSIRO as a whole has strong collaborations with partners in Canada and the USA, with dozens of projects undertaken each year. Canadian projects tend to focus on minerals, mining, mineral resources and related engineering services. Recent partners include Alcan, COREM, Barrick Gold, Riot Tinto Alcan and Syncrude. Incidentally, CSIRO has a Minerals Down Under Flagship which builds on the organization’s expertise in these areas (most notably on extraction and separation), based at a CSIRO facility in Clayton, Victoria. US-based partners include Boeing, Chevron, DuPont, NASA, the US Department of Agriculture, the National Oceanic and Atmospheric Administration. According to the CSIRO web site, other initiatives include the Fulbright CSIRO Postgraduate Scholarship, established in 2008 to enable an American citizen to undertake postgraduate research in Australia at a CSIRO institute.

The strong Australian dollar has been an ongoing issues from the economic perspective, since it hurts the country’s ability to export products that it manufactures. As a consequence there has been a lot of off-shoring to Thailand and Malaysia, primarily because of free-trade agreements in place with these two countries. The once strong electrical appliance industry in Australia has largely disappeared, with some exceptions, namely in the large refrigeration and commercial cooking appliance markets. There has been 15-20% decline in the manufacturing of larger passenger vehicles in Australia; Toyota, General Motors and Ford still have a visible presence but are confined these days only to a handful of vehicles being manufactured in the country.

Still, it is through working with entities like CSIRO that the Australian manufacturing sector can re-group and prosper once again. CSIRO is undoubtedly a jewel in Australia’s crown, a jewel that hitherto now has not got a lot of whole lot of attention from strategic materials folks outside of the academic community. Folks in the rare-earths sector may have heard of the work and capabilities of ANSTO Minerals, another Australian government organization, with respect to process development; CSIRO also has extensive capabilities and experience in these and other related areas too and should not be overlooked. Groups like the one that Dr. Collocott leads can be a “below-the-radar secret weapon” for manufacturers, who need high quality contract research done by folks who know what they are doing.

My thanks go to Stephen Collocott for facilitating my visit to the CSIRO Materials Science & Engineering Division.

Thanks for a vivid description – truly the next best thing to being there.

@G H: thank you for your kind words.

Dear Gareth
Many thanks for your visit to CSIRO in Australia and to share of what you consider might be contributed from us.

Dear sir
I am from Egypt and working as doctor in metallurgy in Nuclear Materiel Authority with prof. Moneir AbdElfatah and interesting in working about preparation of magnet alloys specially Fe-Nd-B alloy by Aluminothermic
reduction and hope to work under your supervision

Dear Gareth,
Thank you so much for all your work on this visit. I had a friend go to work for CSIRO many years ago as a young man and I wouldn’t be surprised if he was still there. In the current climate of high unemployment it is not difficult to envy such people as your friend Dr. Stephen Collocott with such a good job. It’s a super report from you. Thank you and much appreciated.

To Humanity,
It would be interesting to find out what these researchers thoughts are on Magnet Motors, Collapsing field Regeneration, Perpetual Motion and the various designs which have made their way onto Youtube. Magnets are answer to a future without fossil fuels wish more people would wake up and not go by what the oil companies want us to believe.
Best Of Luck Guys!!

Next post: A Visit To The Quest Rare Minerals Mini-Pilot Plant For The Strange Lake Project