On Rare-Earths, Quotas And Embargoes

As we approach the end of October 2010, initial news coverage of disruptions in the Chinese supply of rare earths to Japan, has given way to news of similar disruptions to the USA and to Europe. The majority of coverage accuses China of imposing an embargo on its rare-earth exports, in retaliation for specific actions taken by various countries. Such actions apparently include the arrest of a Chinese fishing-vessel captain close to disputed islands in the East China Sea; criticism by the USA of China’s currency policies; allegations of illegal subsidies to its domestic renewable-energy industry; and a wide-ranging formal complaint against China, filed by a US steelworkers’ union, with the US Trade Representative.

Chinese officials as senior as the country’s premier, Wen Jiabao, have publicly denied that there is any such official embargo, and that China would not use its dominance in the production of rare earths as a bargaining chip when dealing with other nations. To complicate matters further, however, there are now stories circulating that the authorities in China have plans to further reduce the semi-annual export-quota numbers by 30%, though such initial reports were swiftly denied by the authorities.

It is thus rather challenging to figure out just what exactly is going on in this space at the moment. Certainly it is possible that there really is an official embargo in place, despite denials from the Chinese authorities, but there are also a number of other more plausible explanations, which, either individually or in combination, may well explain what has happened.

Before getting to those possibilities, let’s look at what we do know – some facts that few people will likely dispute:

This latter point is better illustrated in the following chart [click on the image or here to enlarge], where the “Official ROW Demand From China” data points represent the “official” numbers [overall ROW demand minus the rare earths supplied from sources outside of China] whereas the “Actual ROW Demand From China” also factors in an estimated uncontrolled / illegal supply equal to 25% of official numbers for overall ROW demand: 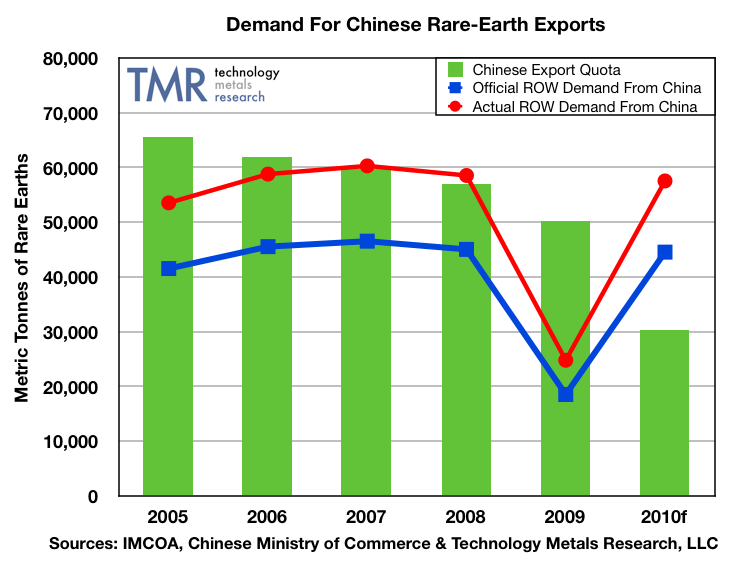 Note that the basic demand data was obtained from IMCOA, who allocates a 15% margin of error on those numbers. What this chart also shows us is just how sensitive the overall supply situation is, to the uncontrolled and illegal sources in China at present.

So, with all of that said, let’s turn back to the current issue of supply disruption. Note that I am not an expert on the import / export of commodities; however, just a little thinking on this subject, coupled with the “facts” listed above, yields a surprising number of possible explanations – some or all of which may be in play here. Here are seven HYPOTHETICAL possibilities to start with:

So those are seven possibilities for a start. I am sure there are others. Combinations of the above, together with a lack of effective communication that is frequently encountered between ROW and Chinese companies, make for a complex set of possible reasons for the current supply disruption, a complexity not well-understood or reported on in the recent press coverage.

This latter issue of communication is especially aggravating, given the common practice of Chinese companies to neglect to provide updates and information on production or other logistical issues, even in the best of times. There are differences in business culture here that in my opinion, have been significantly under-estimated as a secondary factor in making a difficult situation worse. The Chinese authorities, too, have also done a pretty ineffective job of properly explaining their own point of view, on the actual root causes of the supply disruptions.

So let’s come back to the topic of the export quotas for a moment. It is entirely possible that future export quotas will be allocated to specific companies in a more granular fashion i.e. allocations will be determined based on individual rare earths, or groups of rare earths [such as lights or heavies]. Given recent comments from the Chinese authorities over concerns of dwindling supplies of heavy rare earths, such a move would be a logical way of streamlining the quota process and to make it more discriminating.

In addition, it is clear that many outside of China are not convinced by China’s principal argument for reducing exports of rare earths – specifically that it is required in order to clean up the environmental mess that has been created, as a result of unregulated, full-bore production to date. This argument would be strengthened considerably if the Chinese authorities used quotas to either restrict the overall production of rare earths within China [regardless of the destination of those rare earths] or to restrict the total quantity of rare earths to be sold by each Chinese trader, instead of just the amount to be exported. Either or both of these changes, would allow the Chinese authorities to still achieve their stated aims of clean-up and consolidation within the industry, without falling afoul of accusations that the export quotas are simply a way to control the rest of the world. They would also effectively counter criticism that the Chinese are simply running up prices for those exports, making it even more difficult for rare-earth users outside of China to compete with those inside the country, than it already is.

This growing disparity in export vs. domestic pricing for rare earths is clearly beginning to erode the confidence of those outside of China who bought into China’s original explanations for the quotas in the first place. It is clearly reasonable for China to want to do what it needs to do in order to clean up the environmental damage caused by production in the past, and to generally want to conserve its natural resources for future use. Making the quotas fairer would give significant weight to these explanations.

Finally, speaking of environmental issues, the West could stand to do some self-scrutiny of its own. The excessive paperwork and bureaucracy associated with the permitting of new rare-earth and other rare-metals projects, in certain Western jurisdictions, has had a significantly negative impact on the progress and viability of such projects. Safeguarding the health and safety of people, and taking care of the environment should of course always be top priorities, but it appears that some jurisdictions fail to see the wood for the trees with these processes. As my colleague Jack Lifton likes to say, the road to the green economy starts in the black earth, i.e. the metals that go into components and devices vital for sustainable technologies, have to be mined and processed somewhere.

It is perhaps a little ironic then, that it is a growing awareness of the importance of these two priorities – taking care of the people and their environment – that is the key driver, ostensibly at least, in the imposition of China’s export quotas on rare earths in the first place.

If you can keep your head when all about you are losing theirs … then you’ll understand the internal dynamics of a country like China that was a harsh export competitor when it produced REEs in surplus and is getting more picky as the surpluses disappear.

from a Chinese viewpoint, “embargo” means 1) running out of EL in Y10 2) custom Check carefully to avoid add. 25% uncontrolled one~ 3) believe ROW has abundant reservation REE or in earth~ ps. the stock price of Bao steel RE these months is the charming headspring of the holder

Interesting all the brahura about China’s export quota on REE. I did a quick browse on quotas and restrictions and the following headlines haven’t created the anxiety the Chinese REE has:

Hmmm? so why can’t the Chinese restrict or apply quotas on their REE while other countries seem to do some restricting almost every day? WTO rules say they can’t reduce exports of a diminishing asset? Seems like many western countries could provide domestic REE if they could pony up the $500k and higher prices to make their mines a viable mine to market business. We in the U.S. can give billions to insolvent banks that played roulette with mortgages but have yet to pony up any gurantees or loans to get our REE business up and running. Sounds like our REE companies need to be renamed: Bank of America, Chevron, Archer Daniel Midland, or some other subsidized company to compete.

There is a whole lot of hypothetical talking and guessing based on not really official data. Lots of peaople and institutions talk about quotas referencing several chinese ministeries. I tried a lot in recent weeks to find any of these (chinese) official data on export quotas, export restrictions and so on on rare earths. But I did not find any information that would be scientifically and thus economically viable.
Maybe somebody can help to bring some light into the darkness. Are there official announcements stating quotas, restrictions and so on? Are they in written in english? If not, I am wondering, what we are talking about.

Volker, take a look at: http://www.proactiveinvestors.com.au/companies/news/11026/chinas-rare-earth-export-quotas-ruffle-political-feathers-as-prices-soar-11026.html

Following quote from article: “China set a production cap of 89,200 metric tons this year, while reducing its export quota to 22,300 tons, according to estimates by Guosen Securities Co. It announced that quota in July, and prices have climbed since then.”

Volker, another excellent pitch with almost everything a REE investor needs to help make the right decisions. Some charts in French and some charts missing key players, but keeping that in mind, lotsa info in one place: http://ifri.org/downloads/comptes_rendu/fichiers/51/hocquard.pdf

No doubt, beyond embargo or not embargo, China will try to sell higher prized products and not so much of REEs unprocessed.
Why not? everybody would do so.
So REEs will be in short – maybe a much more critical situation than any civilian or military planner will believe.
Western states: much too slow to wake up.
(The stuff may be poisonous, so we have to ban it. We will produce green energy by windpower, we just have to buy the magnets and the copper and the electronics abroad).
The western world cannot live without these REEs – so which of our industries will decline to nonexistence and the products be bought in China?
Coming serious conflicts or only a trading problem?
We should tell our governments to act – not to cry nor to sleep.
There was once the necessity of a second-source for any product that was used in critical industrial production.
If we proceed the same direction as in the last 20 years the western states will be the banana-republics of tomorrow!
RH