In January 2011 the, US Geological Survey (USGS) updated its Mineral Commodity Summary for rare-earth oxides (REOs). There were a couple of significant changes to the reserve-estimate data, specifically for Australia and for China, which are worth noting.

The figure below shows the updated USGS REO reserve estimates for 2011: 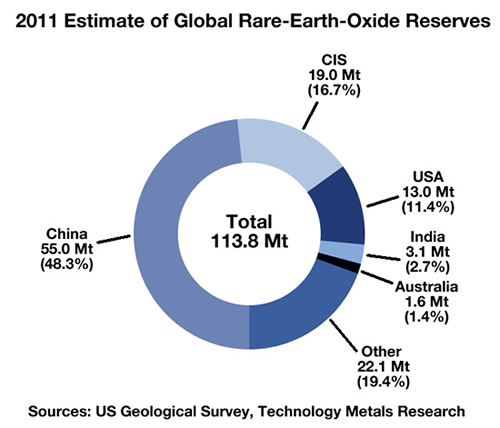 The next figure shows the REO reserve estimates from 2010: 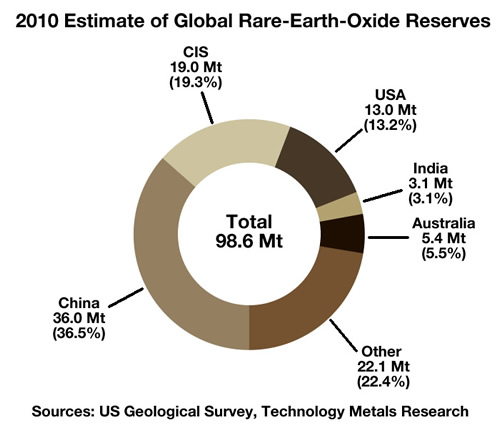 The estimate for Australia has been reduced from 5.4 million metric tonnes (Mt) of REO to 1.6 Mt REO, as a result of a change in the data that the USGS uses for this estimate. It is now based on the Economic Demonstrated Resource (EDR) estimate for REOs, published by Geoscience Australia, which has a narrower definition of recoverable resources / reserves than in the past. Going forward, the USGS will use Geoscience Australia’s published EDR number for REOs.

After seeing the new data I put in a call to Daniel Cordier, the USGS minerals specialist for REOs, to ask about the new numbers. Daniel said that USGS is continually improving and updating its data-gathering and evaluation methods, and that the latest numbers are a reflection of this effort.

It usually takes a while for new data like this to be widely adopted, which is why you’ll see a range of reserve estimates in the myriad presentations and slide decks out there, telling the rare-earth story.

I have always understood that the USGS rare earth figures are flexible. In 1997, as I recall, the USGS estimated China’s REO reserves at 49 million tons. And as I recall in the 1980s the USGS predicted that by 2000 the principal supplier of REOs to the globe would be South Africa.

The most interesting aspect of the charts that you use is the volumes ascribed to “others.” USGS Estimates of Chinese reserves seem to have risen 50% in one year while “others” has not budged even though most of us are aware of significant large discoveries of REOs in places like Gabon, Malawi and Namibia as well as in Brazil and Argentina.

Its time that we had peer-reviewed numbers and analyses of government backed publications to avoid situations like this.

Congratulations on this article. Its very significant and important to our understanding of the issue and to its clarification for potential investors.

Gareth
whereas Chinas Bayan Obo deposit has reached the bottom of its folded synsedimentary structure, both huge Australian deposits are open to depht. We will know more once Arafura Resources has completed its recent drilling campaign striving for -200m for the first time. The reserves could easily be doubled

Gareth:
It is time to consider the carbonatites resources in Angola (Txvira, Bonga and Catanga Complexes). They have pyrochlore (Nb) and Rare Earth minerals. The big question now is: Western countries are with their arms folded in the massive presence of China in Angola. Last news from there informs that more than 600.000 chinese are working now in Angola. It will be easy for them to control Angola’s natural resources.

Gareth, these new data for global rare earth totals for 2011 are much appreciated. I am wondering whether a breakdown by light and heavy rare earths is similarly available. Given how critical the supply of heavies is likely to be going forward, I wonder whether the changes in reserves from 2010 to 2011 are largely in the LREE’s or whether there has been any relative improvement in the situation with HREE’s? I recognize of course that reserves do not necessarily translate readily into supply.

You did your homework again. Love your charts. It all looks like a rosy future for GO GREEN AMERICA ! The Green market will soon make Rare Earths so valuable that mining and processing costs will easily be obsorbed and new mines like ours will have a strong likleyhood of success. But we still need strong government to implement patend laws for new claims and investors will come running into the future. Rare Earth Exploration llc JackWayne

The data shown are amazing . These are highly useful .

The LYNAS deposit at Mount Weld, 35 kilometres south of Laverton, is the world’s richest known rare earth deposit. Rich means mine less and get more.

So what am I missing here? Appreciate some more detail. thanks

Thanks for this interesting article. I was wondering why the reserves of e.g. the United States, Malaysia and CIS have not been increasing since 2008 as the price of most rare earths has been increasing overall. The term reserves include this economically feasibility and thereforeit should become economically attractive to mine new rare earth deposits if prices rise right?

What about Stans Energy in CIS?

Dear Gareth
From your data China increased its REO reserves by 18.5 million tons
in 2011 relative to 2010, a jump of 51% in just one year.
Is there any reasonable explanation for that?. You explained the change for the australian reserves, but not for the chinese.
Thanks

I also want to know the reason for the increase of chinese REO reserves.Thank you!!

quite simple. these elements are the most critical in war, whether for defense or offense. the chinese have the americans by the balls. soon the american treasuries will be hedged to counter american default. it is not in the world’s best interests to support a rogue cop gone bad. I highly recommend reading the truthers and ‘the truth shall set you free’.

Previous post: Perspectives On The Low Pricing Of The Rare Earths In The Chinese Domestic Market

Next post: Will China Become A Net Importer of Rare Earths By 2015?